What Does "Affordable House Plans" Specifically Mean for You?

The buying mindset
Really think about this: What are affordable house plans? That is such a broad question that it really has no correct answer. When shopping for a specific item I need, my mind is made up ahead of time what I can afford. I have a set limit, within my budget, which allows me to go make that purchase of whatever I need at the time.

Whether done correctly or not is not the point here, but only that some decision is always made before buying about the value equaling or exceeding the price. Price alone is rarely, and should not be, the single deciding factor. I have found out through experience that confusion abounds about what determines how affordable house plans really are. Mostly it comes from price versus value misconceptions.

A classic demonstration
For instance, I recently added another builder to my list of clients. At our first meeting, we talked about what he could expect to pay for each set of plans I drew for him. He would need almost every set of plans engineered and stamped. Before I told him what I estimated my design fee would be for his projects, he told me he was paying a flat fee of $300 per plan. My jaw just about hit the floor! There would be no way to do most of his plans for that amount of money. To make a long story short, the person that had been doing his designs previously was a licensed engineer and a friend. He was getting the friendship price of $300.

That fee for my new client was what was in his mind, affordable. The key factor here was that his friend also worked at another job and was almost never available. My new client needed to have contact with the designer during business hours and I fit the bill. However, his perception of plan prices was rocked when I told him what I would charge. After he saw the plans that I drew for him, the price suddenly did not matter as much. He complimented me by saying that he had never worked off of a better set of plans. I do not say that the blow my own horn, but am just illustrating that you get what you pay for.

All plans should NOT be considered equal…
I have seen house plans that people paid (what I considered) astronomical prices for, but in my mind they were what I call preliminary plans. They had very few dimensions, and the amount of detail was absolutely horrible. (Yes, I’m biased. But I have to be to keep producing the quality my clients deserve!) The buyer thought he was getting a great deal because it was well within the range of what he had set his mind on that he could pay for a set of affordable house plans even though it was pricier than someone else’s ideals.

Nail down the real value!
You do not, and I emphasize, do not want to put in a lot of time and effort into a designer who does just the bare bones amount of work and charges anywhere from $75-$100 an hour. Ask them in detail what you can expect to get from them as the final product. Also ask your builder what he would like to see on a set of plans. A complete set of affordable house plans is one that is detailed enough to speed up the building process and will more than make up for the cost of the plans on the job site.

Final thoughts to evaluate
So the question remains, what are affordable house plans? That will be determined by you alone. You can skimp on the quality of the house plans and end up having the builder spent a lot more time in the field, or convince yourself that spending a little more at the beginning phase of the home design process will pay off in spades out on the job site. Let your budget and some common sense principles be your guide.

A Free Gift for You Because I Truly Care How You Will Experience Living In Your New Home... 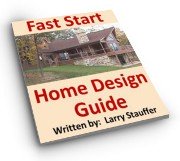 Jump-start your dream home planning by claiming your "Fast Start Home Design Guide" below. Simply fill out the following form...

"Thank you! Received the plans yesterday. They look great. We will definitely recommend you. I'm so excited now to have a visual. We'll have you out when it's all done.

"In my line of work I build both log and conventional homes. It can be difficult to find someone who can draw prints for both styles. I received a flyer in advertising Larry's Home Design. I was planning to build a house for myself and decided to try Larry's that way I could guage whether I would use him for my clients. I was very impressed and since then Larry's Home Design draws prints for all our customers."

"…very easy to work with and quickly understood what we wanted. Larry, I truly enjoyed working with you on the design. You were always there to talk to me… It was wonderful for me getting to help the guys build the house and see it come to life. It was a lot of work, but now we can enjoy the fruits of our labor. Please stop in and see us whenever you can. You are always welcome."

"Believe me, Larry & his ability to design structures, is a 'jewel in the rough.' I was referred to him as an experienced log home designer & I had either a log (or log slab) home in mind. I contacted Larry, & in no time, had plans & the specifications. This was to the last nail & piece of siding.

Larry's work is reasonably priced & excellent quality. He knows builders & suppliers who can have you in 'front of the fireplace' in no time."

... Thanks again for your help with these. You have been by far the best designer we have dealt with, both communication wise and product quality wise. Everything I have looked at had been excellent. Keep up the good work.